Tabb Forum recently ran two informational articles on the topic of negative interest rates. The first, titled, “Derivatives Modeling and Negative Interest Rates: Key Considerations,” was authored by thought leader, John Hull, PhD. The other, brought to us by FINCAD’s Russell Goyder, PhD, was titled, “A Closer Look at One Method for Modeling Negative Interest Rates.”

The articles review key derivatives modeling challenges spurred by negative interest rates, and provide practical tips for taking these and other such challenges in stride.

There’s no denying that negative interest rates have become a feature of financial markets over the last few years. In his article, John describes that negative rates create modeling problems, particularly when valuing interest rate derivatives. The traditional models that traders have been using for the last 30-plus years are now unusable without modification. They were simply not designed to accept rates lower than zero.

John also explains that while traders do have a few different options when modeling derivatives in the face of negative rates, such as Black’s model, Bachelier normal model, the SABR model and the LIBOR market model, his recommendation is to use Black’s model, but with a shift, i.e. the shifted lognormal model. He reasoned that Black’s is a traditional model standard in most trading systems, and is readily understood by most traders. Introducing the shift to accommodate negative rates is a minor tweak that does not require much in the way of software reengineering.

In Russell’s article, he honed in on SABR, a popular model for derivatives that works well with negative rates if a shift is introduced. He gave a comparison analysis of several SABR model variants (including: lognormal SABR, normal SABR, shifted lognormal SABR, exact CEV SABR, approximate CEV SABR, exact free boundary SABR, approximate free boundary SABR, and ZABR), providing insight into how each performs in terms of speed, level of complexity to adopt and how compatible they are with negative rates. The results of the comparison testing are depicted in the graph below. 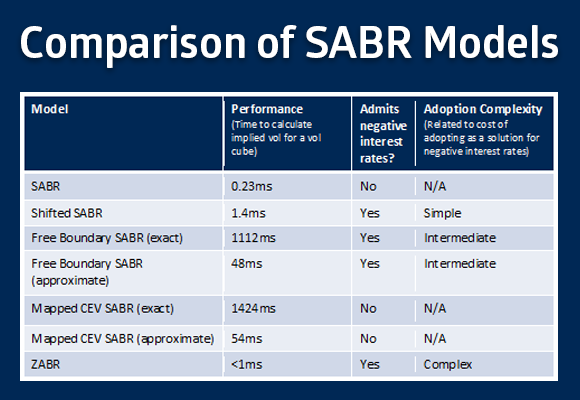 While Russell’s recommendation was ultimately to utilize shifted SABR, he commented that the other approaches do have some merit. What this means is that financial systems need to be based on flexible analytics, where the decision to adopt a new model is made on your own terms, and driven by business need.

To ensure that models can be changed effortlessly, analytics systems need to work with three key ideas as first-class components of the system:

Russell concluded the article reminding us that storms such as negative interest rates are bound to keep coming and models will inevitably come and go. It’s only with a truly future-proof and flexible approach to modeling that firms can take these and other changes in stride, all while maintaining a competitive edge.

Read John’s article on Tabb Forum, and read Russell’s article for more on this pressing topic.