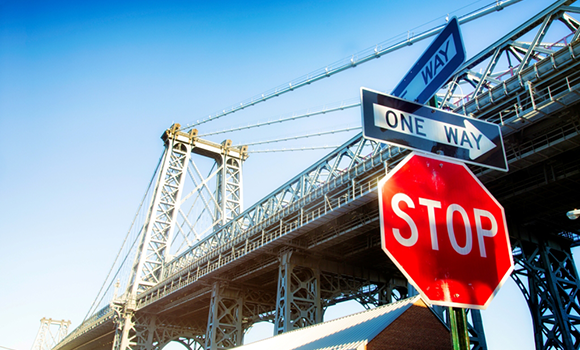 The credit value adjustment (CVA) is an adjustment to the way a dealer values a portfolio of derivatives with a counterparty to allow for the possibility that the counterparty might default. The CVA reduces the value of the portfolio by the amount that is expected to be lost if the counterparty defaults. We described how it is calculated in an earlier blog: “Valuation Adjustments 1.”  The life of the outstanding derivatives is divided into a number of intervals and CVA is set equal to

When calculations are carried out in the usual way the probability of default, $q_i$ is assumed to be independent of the expected exposure, $\nu_i$.  This means that the probability of a counterparty default in the ith interval when the dealer’s potential loss is high is the same as that when it is low. The situation where $q_i$ is positively dependent on $\nu_i$ is referred to as “wrong-way” risk. In this case, when the dealer’s exposure to the counterparty is relatively high the probability of a default by the counterparty is higher than normal. The situation where $q_i$ is negatively dependent on $\nu_i$ is referred to as “right-way” risk. In this case, the counterparty is more likely to default when the dealer’s exposure is relatively low. Wrong-way risk increases CVA while right-way risk reduces CVA.

Alternatively, consider the case of a gold producer that has used derivatives to hedge 50% of its production by entering into forward contracts in which the dealer agrees to buy gold in the future at a specified price. In this case there is likely to be right-way risk. The gold producer is likely to default when the price of gold is low and it is losing money on the unhedged part of its production. But when the price of gold is low the value of the forward contracts to the dealer is also low. In this case, the derivatives have a positive value to the gold producer and a negative value to the derivatives dealer.  The dealer’s exposure is therefore likely to be low when the gold producer defaults.

A simple way of dealing with wrong-way risk is to multiply the expected exposure $\nu_i$ by a factor “alpha” in the version of the model in which $\nu_i$ and $q_i$ are assumed to be independent. The effect of this is to increase CVA by the alpha multiplier. The Basel II rules set alpha equal to 1.4 or allow banks to use their own models, with a floor for alpha of 1.2. This means that when wrong-way risk exists, at minimum, the CVA has to be 20% higher than that given by the model where $q_i$ and $\nu_i$ are independent. If a bank does not have its own model for wrong way risk, the CVA has to be 40% higher. Estimates of the increase in CVA due to wrong-way risk calculated by the models used by banks range from 1.07 to 1.10. Another similar approach to calculating wrong-way risk is to set $\nu_i$, equal to the present value of the exposure that is k standard deviations above the expected exposure for some k.

We propose a different approach, which we first suggested in Hull and White (2012). Instead of changing the calculation of the expected exposures, the v’s, we change the calculation of the probability of default, the q’s. The probability of default between time t and time $t + \delta t$, the hazard rate $h(t) $, depends on the evolution of the market variables in the Monte Carlo simulation used to calculate CVA up until time t. We model a relationship between the hazard rate of a counterparty and a variable (or variables) that can be calculated in the Monte Carlo simulation and may affect the dealer’s exposure to the counterparty. This relationship can be either deterministic or stochastic. There are three ways of proceeding:

for some function f. The function can involve a noise term (although in practice we find this makes very little difference).  The function chosen may depend on the nature of the variable x and the nature of the company. The function f must have the property that $h(t) \ge 0$ for all possible values of x(t) and the noise term, if any. It must also have the property that for all times t the expected probability that there is no default before time t based on the random hazard rates equals the probability of no default before time t that is inferred from credit spreads at time zero. This means that the expected value of  $\exp \left( - \bar h t \right)$ must equal $\exp \left( -st / \left( 1-R \right) \right)$ where $\bar h$ is the average hazard rate between time zero and time t, s is the counterparty’s credit spread for maturity t,  and expectations are taken over all possible paths that x may follow. To allow the condition to be satisfied, the function f must involve a parameter which is a function of time. A simple model which we have used is

Here b is a parameter determining the impact the changes in x on proportional changes in the hazard rate and a(t) is a function of time chosen to match credit spreads.

[1] An alternative we have experimented with is to set x equal to the exposure. However, this does not work as well as setting x equal to the value of the portfolio because the exposure at any particular time is zero for many of the simulation trials.