LIBOR has traditionally been the most important interest rate for derivatives traders. LIBOR quotes for a variety of maturities in a variety of currencies are produced every day by the British Bankers’ Association based on submissions from a panel of contributing banks. They are estimates of the unsecured rates at which AA-rated banks can borrow from other banks. In recent years more attention has been paid to OIS (overnight indexed swap) rates. The OIS rate is the fixed rate that can be exchanged for the geometric average of overnight rates in a swap. It is the rate that is considered equivalent to the rate obtained by rolling over a sequence of daily loans at the overnight rate. (In U.S. dollars, the overnight rate used is the effective federal funds rate.)

Before the 2008 credit crisis (December 2001 to July 2007), the LIBOR-OIS spread, the LIBOR rate less the corresponding OIS rate, was typically around 10 basis points and the spread term structure was quite flat with the 12-month spread only about 4 basis points higher than the one-month spread on average. This is illustrated in Figure 1a. Because the term structure of spreads was on average fairly flat and quite small, it was plausible for practitioners to assume the existence of a single LIBOR zero curve and use it as a proxy for the risk-free zero curve.

The dramatic increase in LIBOR-OIS spreads during the crisis led practitioners to review their derivative valuation procedures. A result of this review was a switch from LIBOR discounting to OIS discounting. Finance theory argues that derivatives can be correctly valued by estimating expected cash flows in a risk-neutral world and discounting them at the risk-free rate. One argument in favor of changing to the OIS rate for discounting is that it is a better proxy for the risk-free rate than LIBOR.[1] Another argument (appealing to many practitioners) in favor of using the OIS rate for discounting is that the interest paid on cash collateral is usually the overnight rate and OIS rates are longer-term rates derived from these overnight rates. The use of OIS rates therefore reflects funding costs. 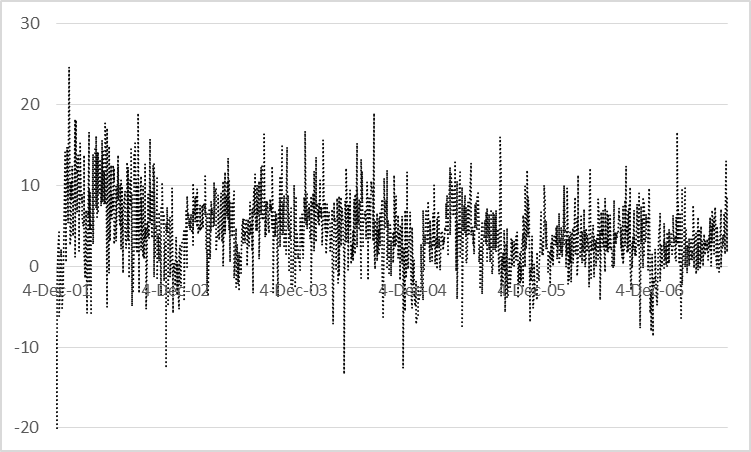 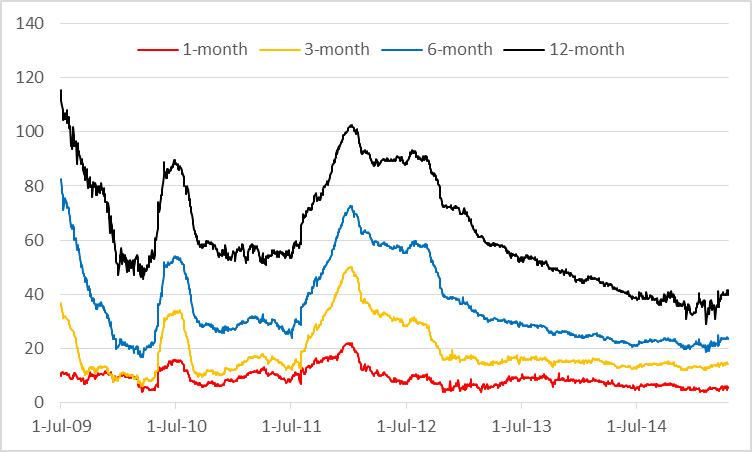 Pre-crisis it was possible to (a) calculate a zero curve from LIBOR deposit rates and swap rates, (b) construct a model of the short-term LIBOR rate, and (c) use it to calculate the value of an interest rate derivative.  In Hull and White (1994a, 1996, 2001) we develop a way this can be done using a trinomial tree. A trinomial tree is equivalent to the lattice used in the explicit finite difference method.

One approach to term structure modeling is to use the methods in Hull and White (1994a, 1996, 2001) to build a tree for the short-term OIS rate and assume that the LIBOR-OIS spread is deterministic. For example, if a Bermudan swap option is being valued where the tenor of the underlying swap is six months, the procedure would be as follows:

In Hull and White (2016) we show how the method can be extended so that the LIBOR-OIS spread is stochastic. The first two steps are the same. We then proceed as follows:

The tree is then complete and can be used to value a Bermudan swap option or other instrument.

This type of tree approach provides an alternative to Monte Carlo simulation for simultaneously modeling spreads and OIS rates. It can be regarded as an extension of the explicit finite difference method and is particularly useful when American-style derivatives are valued. It avoids the need to use techniques such as those suggested by Longstaff and Schwartz (2000) and Andersen (2000) for handling early exercise within a Monte Carlo simulation.