Blog
Gearing Up for the End of IBOR

“Some say only two things in life are guaranteed: death and taxes. But I say there are actually three: death, taxes and the end of Libor.” 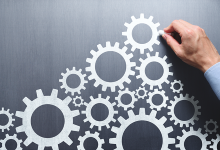 The move to alternative risk-free rates (RFRs) is upon us. While we do not know an exact date for when Libor will be formally discontinued, we believe it’s coming –and relatively soon. Firms are now in a phase of needing to adapt their technology and valuation and risk processes to meet this new frontier.

From EONIA to €STR

To foster liquidity one of the first steps involves transitioning the discounting risk from EONIA to €STR for cleared trades. Originally this transition was planned for June. But in light of operational risk created by COVID-19, the ECB working group on Euro risk free rates agreed to move the deadline out to late July— a date that LCH SwapClear, Eurex and CME have all agreed upon.

How then will the switch to €STR be managed? Multiple valuation runs will be used to manage the transition. In the first (standard PV) cycle, members books will be marked using the EONIA discounting curve, while in the second (special PV) cycle, the €STR discounting curve will be swapped in. The difference between the two PV cycles will be used to compensate members, in cash, accordingly.

On the US Dollar side – the transition is planned from FEDFUNDS to SOFR discounting. So far, the date for this adjustment remains set for October 2020. This market is vast and that manifests itself in the products that are impacted: USD-LIBOR (of various tenors), SOFR Swaps, FEDFUND Swaps, USD ZC Inflation Swaps, MXN swaps and various non-deliverable currencies.

Like the €STR transition, for SOFR there is the idea of cash adjustments and multiple value cycle runs. But unlike €STR, with SOFR the concept of risk-based compensation comes into play (the spread between €STR and EONIA is fixed, the spread between FEDFUNDS and SOFR is not). At the point of transition – the FEDFUNDS discounting risk becomes SOFR discounting risk. The clearing houses plan to centrally book basis swaps (FEDFUNDS vs SOFR) to reset each members risk back to the FEDFUNDS discounting risk. The choice then sits with the member whether to unwind the basis swap, via an auction mechanism to gain exposure to SOFR or to instead gain exposure, incrementally, as new trades are booked.

We can think of these changes as something of a “big bang.” There are a few key risks arising from this, including:

What the World Needs Now: Flexibility

Many participants will encounter curve-building complexity as they transition to the new RFRs. They will need the ability to accommodate different instruments, often with differing liquidity profiles to accurately value and risk manage their portfolios.

The graphs below illustrate flexible curve-building. Here we see SOFR at the short-end with monthly and quarterly SOFR futures, typically with convexity adjustments to account for the differentials between the OTC and exchange markets. In addition, we can think about weaving SOFR into the curve framework using a number of different instruments: 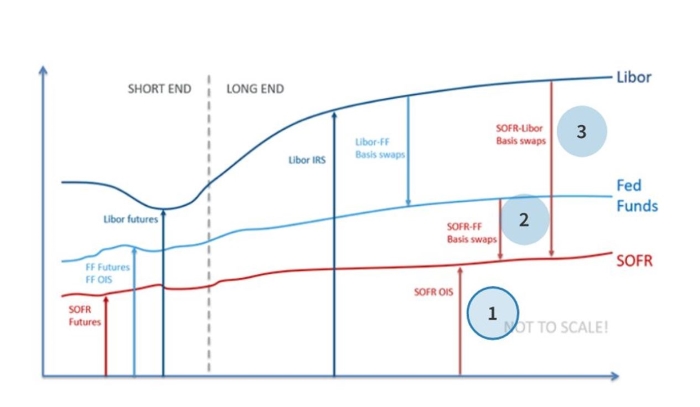 In reality, at present, there is likely to be more liquidity in the FF/SOFR basis market. This is expected to be mirrored in other jurisdictions as the number of LIBOR transactions that are based on transactional data continues to fall. Further credence is given to this probability based on the CME’s plan to use the FF/SOFR basis swaps for their upcoming transition to SOFR.

Adoption of the RFRs

Adoption of the RFRs faces a major challenge – in light of the large volume of legacy deals. The IBOR rates that these deals reference are different to the RFR rates that are proposed. They differ by jurisdiction but can be put down, in the main, to term, compounding and credit sensitivity differences. These differences present an opportunity for value transfer.

In theory, these differences could be eliminated by a term structure of spreads between the IBOR rate and an equivalent, compounded rate. The market, however, has favored a simple approach, via the ISDA consultations. The proposal is based on a single 5y, lookback, median spread approach per IBOR and tenor/RFR combination. More recently – the Alternative Reference Rate Committee has recommended a similar 5y lookback, with an additional 1y transition period for consumer products.

One of the major challenges that we see in the LIBOR transition is the lack of consensus across or even within jurisdictions with respect to different product types. This causes issues for institutions trying to get a handle on the payments that need to be made.

This lack of consensus has manifested itself in different conventions; how to compound the RFR, how to compound the spread over the RFR, defining how the rate is looked up (look-back), whether the accrual dates should be shifted to be aligned with the look-back (accrual shifts), whether the rate locks towards the end of the interest period (lock-out) and an army of rounding rules.

Managing the conventions and minutiae surrounding the new RFRs can seem daunting – for that reason we’ve been working with customers to develop our ARRC (Alternative Reference Rate Calculator) to support a number of jurisdictions and product types. It supports all of the features that I’ve mentioned above and may be used to generate cashflows to be used for payments of various RFR-linked instruments.

If you’re looking for flexible tooling for IBOR-transition workflows, contact us to discuss it further.

Paul McLornan joined FINCAD in 2019 and is Head of Global Pre-Sales and leads all of their pre-sales activities. Prior to FINCAD, Paul worked with other financial software vendors in various quantitative and developer roles. His previous titles include XVA Developer, Business Solutions Consultant and Market Risk Analyst.