Blog
LIBOR Discontinuation – The End of the Beginning? 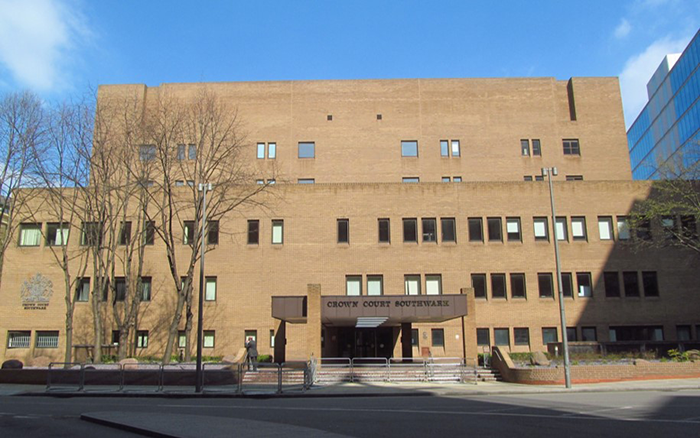 It’s likely that those of you keeping up with market events will be familiar with the landmark building pictured above. The Crown Court at Southwark is a court designated as London’s fraud centre, where cases concerning market manipulation have been tried.

It’s safe to say that the current financial landscape is a tumultuous one—riddled with uncertainty, upheaval and, at times, dirty dealings. And now, to add to all this, we also have LIBOR discontinuation to concern ourselves with.

Given the febrile nature of our economy, politics and general outlook on life, it’s tempting to damn those who would choose these times to burden us with further worrisome paradigm change. I’m sure Andrew Bailey did consider the macro implications of his decision, when he signalled the end of the most globally recognised set of risk-free measures in July 2017. However, many are now of the view that regulators, who are lining up globally around the requirements for interbank rate reform (‘IBOR’), should row-back given the magnitude of the challenge and the lack of clear consensus on the way forward.

We should not forget Southwark Crown Court when we reach such conclusions – nor the extent and callousness of the market manipulation, or more plainly ‘rigging’, of LIBOR which has led us to this point.  Tom Hayes, the very the first person to be convicted of market manipulation is cited to suffer from a medical condition which may have reduced his capacity to see right from wrong. However, systematically manipulating LIBOR rates to support trading axes was clearly abusive and testament of a model requiring root and branch reform.

2012 was considered the watershed year for the LIBOR scandal, nonetheless global regulatory organisations had already been in the process of investigating potential abuse for several years.  In the UK this allowed regulators to react quickly in the guise of recommendations made in the Wheatley Report. Submission and admission of LIBOR have become regulated activities, the BBA has been replaced with ICE as Administrator and new toughened up market abuse legislation prevails. Surely these steps, amongst others, are enough to save LIBOR in its current form?

Not according to Mr Bailey. Frivolous commentators like to suggest ambition for the next Governorship of the Bank of England has been his key motivation. However, in doing so they wilfully ignore the fundamental flaw in the LIBOR process which remains: Banks no longer wish to quote LIBOR because the link between quotes and transactions still cannot be established.

The 2008 financial crisis saw liquidity evaporate in the interbank lending market. Cautionary tales such as Northern Rock mean that banks do not tap capital markets to anything like the same degree to fund their balance sheets. Indeed, since the introduction of the ‘living wills’, they now must evidence diversity in their funding profiles, with a much greater focus on retail funding – or revert to a more traditional banking model. The LIBOR yield curve as a result has become less granular, with fewer points on the curve actively quoted. Moreover, half a decade on from the nadir of the crisis, it remains virtually impossible to create a link between those quoted rates and deals/volumes. Banks now feel participation in the LIBOR process, with the ongoing reputational damage and increased regulatory burden, to no longer be worthwhile.

Anyone hoping that the renewed focus on LIBOR would simply lose momentum would have been extremely disappointed, when on the 19th of September last year, the PRA and FCA distributed preparatory requests to major capital market organisations. We were therefore quite surprised to see the following results from a LIBOR survey we commissioned at FINCAD:

Q. In order to avoid a P&L jump, do you plan to restructure your existing portfolio of Libor-linked trades? 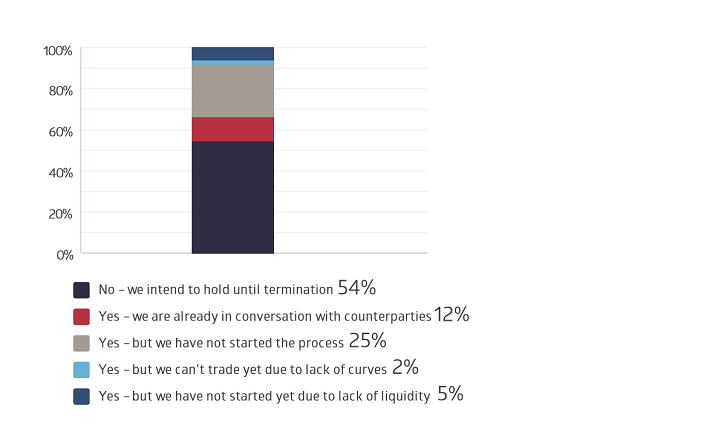 What conclusions are we to draw, given over half of our respondents have suggested they have no current plans to restructure their existing LIBOR linked instruments? Using an expedient form of analysis, one could easily conclude that many participants hold LIBOR-linked instruments which will simply mature before any deadline enters force. This is indeed a stated calculation by regulators, given the degree of forewarning that has been afforded to market participants. Such a quick analysis would be misleading however. Whilst some shorter dated instruments could be validly held to maturity, this does not perfectly represent the typical instrument holdings of over half of our survey group. LIBOR remains a critical benchmark for many medium-long dated instruments and OTC transactions, which will be present, to varying extents, in a majority of portfolios.

The intransigence we have witnessed has two main drivers: Firstly, liquidity in the key projected LIBOR replacement measures remains poor. In the United States, the Secured Overnight Finance Rate (SOFR) has been heavily touted by the Alternative Reference Rates Committee as their preferred replacement benchmark. One might imagine that with this heralding, SOFR trading volumes would indicate momentum, however this has not been the case so far. Secondly, belief in LIBOR’s persistence beyond 2021 remains absolute in many quarters. In the UK for example, GBP OIS curve construction is already well established and would appear to be the ready-made alternative to LIBOR. Nonetheless, many in the UK remain convinced that a mutually acceptable way for LIBOR to continue in its current form will emerge from the ether of current discussions – certainly to a sufficient enough extent to substantiate the results of our survey.

We seem, therefore, to have arrived at an impasse, or the end of the beginning, of how financial markets will navigate their path through LIBOR transition. Participants remain, by and large, happy to hunker down in the belief that mechanisms will be found to maintain the status quo. Regulators on other hand, have certainly not backed down from their insistence that a significant paradigm shift is required and on the way. Whilst it would be foolish to speculate at this stage who will win out in this battle of wills, it would be equally foolish for the market not to be adequately prepared for any contingency. Whilst the potential outcomes are indeed path-dependant and multi-faceted, there are utilities available for firms to prepare for all eventualities.  As the debate continues through 2019 and beyond, those primed to move swiftly will inevitably reap the greatest rewards.

To learn more about overcoming the challenges of transitioning away from Libor, please see our latest technical paper, “How the End of Libor Will Impact Delta-1 Rates.”