Synthetic collateralized debt obligations (CDOs) are credit derivatives that are "synthesized" through credit derivatives, such as credit default swaps (CDSs), on a pool of reference entities. Such reference entities can be bonds, loans or simply names of companies or countries. Most synthetic CDOs in the market do not have a so-called cash flow waterfall structure. They can be customized so that the payment structure of a tranche doesn’t depend on the payment structures of other tranches. Such CDOs are thus sometimes called single tranche CDOs. Single tranche CDOs have been developing rapidly for the last few years and are the most popular synthetic CDOs currently in the market. The most popular single tranche CDOs are exchange traded standardized tranches. The reference credit pools of such CDOs are CDS indices, such as CDX and ITRAXX series. Other (non-standard) single tranche CDOs are often called bespoke tranches.

A common structure of CDOs involves slicing the credit risk of the reference pool into a few different risk levels. The level with a higher credit risk supports the levels with lower credit risks. The risk range of two adjacent risk levels is called a tranche. The lower bound of the risk level of a tranche is often referred to as an attachment point and the upper bound a detachment point. For example, a 5-10% tranche has an attachment point of 5% and a detachment point of 10%. When the accumulated loss of the reference pool is no more than 5% of the total initial notional of the pool, the tranche will not be affected. However, when the loss has exceeded 5%, any further loss will be deducted from the tranche’s notional until the detachment point, 10%, is reached.

The most commonly used credit derivatives in synthetic CDOs are credit default swaps (CDSs on CDO tranches) and tranche-linked notes (CDO notes). They can be viewed as extensions of the corresponding single entity credit default swaps and credit-linked notes. Like a single-entity CDS, a CDS on a CDO tranche has a payoff leg and a premium leg. The buyer of a CDS on a tranche will be compensated by the seller for any loss to the tranche and in return he/she pays periodic premium to the seller. As the loss to the tranche increases, the premium notional of the tranche decreases and hence the premium payment decreases. In the case of a CDO note the buyer of a CDO note pays upfront a certain amount, called the note’s principal, and receives periodic coupon payments and its principal at maturity if the tranche that the note is linked to doesn’t suffer a loss. However, when the accumulated loss of the reference entities eats into the tranche, the note’s principal will be reduced by the lost amount and thus the future coupon and principal payment will be reduced. The main differences between a CDO credit derivative and a single-entity credit derivative are twofold: (1) a CDO derivative has a variable notional whereas a single entity credit derivative has a constant notional; (2) a CDO derivative has a protection layer (except for an equity tranche derivative) whereas a single-entity derivative does not.

Monte Carlo simulation has been the most popular method for CDO valuation. It is flexible and relatively simple for implementation. The disadvantage is that Monte Carlo simulation can be resource intensive for large CDOs. In recent years non-Monte Carlo methods, also known as quasi-analytic or semi-analytic methods, have become more and more popular. They are more efficient than Monte Carlo simulation for certain types of synthetic CDOs, particularly, standardized tranches, when a one-factor copula model is used for modeling credit correlation of reference entities.

Valuing a synthetic CDO contract using Monte Carlo simulation is straightforward. First, generate default scenarios of the reference entities based on the Gaussian copula model (Li model) or the multi-step credit index model (Hull-White model). Then, calculate the loss amount to the tranches for each scenario. Next calculate the present values of the default leg and the premium legs for a CDS, or coupons and the principal for a CDO note. At last calculate the average present values.

For this a natural choice is the FFT (fast Fourier transform). When the characteristic function has been determined, the reverse FFT can be used to back out the loss distribution.

are independent Gaussian random variables with mean 0 and standard deviation 1 (N(0, 1)) and αi, called the factor loading of entity i , is a constant between -1 and 1. A higher value of Xi represents a higher credit quality of the entity. Given a default probability pi of the entity one can then find a threshold value of αi of Xi such that

, where Φ is the cumulative distribution function of an N(0,1) variable. With the Gaussian copula model we can determine the credit correlation easily by simply using the joint probability

is the correlation of Xi and Xj and Φ2 is the cumulative standard bivariate normal distribution function.

A special case of the Gaussian copula model is the one for which all factor loadings are equal. For this case each pair of the reference entities has the same correlation, ρ, and the factor loading is the square root of the correlation:

For CDO portfolios these tools are particularly friendly: they can value multiple tranches simultaneously.

Under a one-factor copula model with a constant factor loading the default correlation of the credits in a reference pool is captured by a single asset correlation. A natural question to ask is: given the premium spread of a CDS on a CDO tranche can one find an asset correlation under which par spread of the tranche is the given spread, and if such an correlation exists, is it unique? Such a correlation is also called a tranche or compound correlation. Research shows that, under the Gaussian copula model, for an equity tranche the answer is a "yes" for both questions, but for a mezzanine tranche only the existence question has a "yes" answer. Typically, for a mezzanine tranche there are two distinct correlations that give the same par spread. Such a lack of uniqueness makes such an implied correlation difficult to interpret and even more difficult to use in CDO hedging. 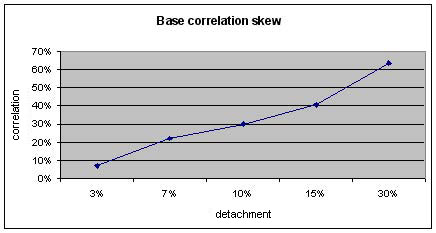 FINCAD Analytics Suite has tools to calculate implied base correlations. These tools can handle both standardized and bespoke CDOs.

An example of a single tranche CDO

If the equity tranche has an upfront fee of 40%, then the break-even spread of the tranche will be 671 basis points, instead of 2095 bps.

The above results are produced with the FINCAD Analytics Suite CDO valuation function aaCDO_ST_DS_std_p.

For more information or a customized demonstration of the software, contact a FINCAD Representative.