Blog
Eliminating the SOFR Basis: What Do We Lose? 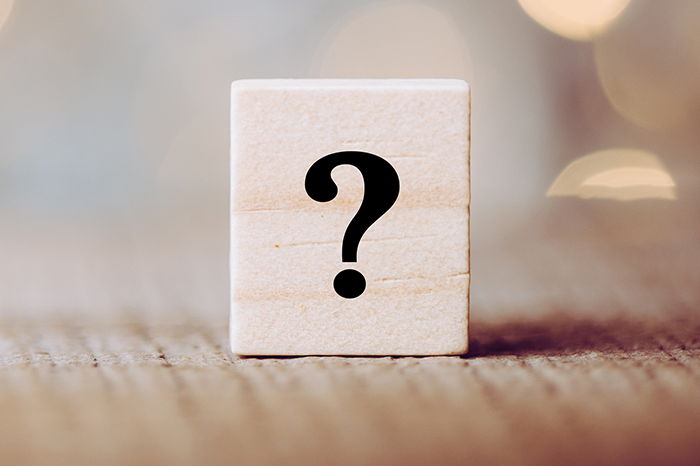 In my previous blog post, I talked about the set of instruments that should be used to build the SOFR curve. Since SOFR is such a new benchmark rate, its derivative markets are not yet mature, and some care is needed when deciding which are the best instruments to use. I explained that there are two approaches to building the SOFR curve, the first being single-curve bootstrapping and the second is global calibration. There are a variety of basis swaps in the market that can couple SOFR to other USD curves, and by using FINCAD F3’s ability to automatically solve a global calibration, it was easiest for me to use the global method to build the SOFR curve.

For many people, however, their instinct would be that building the curves individually is easier than global calibration. The inter-dependence of USD curves, when calibrated to basis swaps market data, creates a problem which requires a global solver. However, there are some ways to avoid this, and the most common way in practice uses approximations to synthesize SOFR OIS from the basis swaps market quotes. Once the synthetic quotes for long-dated SOFR OIS are combined with the short-dated SOFR futures, then it is simple to bootstrap the SOFR curve without needing a global solver.

Even though the synthetic SOFR OIS quotes simplify the calibration there are some downsides to this approach when compared with the global method. The first major drawback is a loss of accuracy due to the approximations used to synthesize the quotes. For example, one way to do this is as follows:

The result are quotes for SOFR OIS that are close to, but not exactly the same as the result of the global method. The slight difference shows up as a mispricing of the SOFR basis swaps that tends to get larger with the swap maturity. An example of this is shown in the figure below, where my previous global calibration is compared with a single-curve bootstrapping from synthetic SOFR OIS. In the case of the curve instruments, the mispricing is shown to be within a few basis points but getting larger with maturity, and the result of mispricing a swap with $1 million notional is also shown. This demonstrates that a good model for the synthetic quotes can eliminate most of the pricing error, but it does lead to some mispricing which probably still needs to be monitored and accounted for. With the global calibration that I used instead, you don’t have to worry about this kind of mispricing since the real market quotes are used directly to build the SOFR curve. 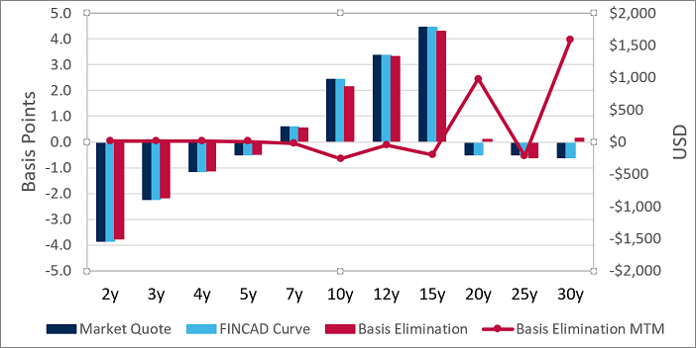 There is another big drawback to the single-curve bootstrap with synthetic quotes. Even if the pricing error shown above is not a big problem, there can be another challenge associated with understanding the market risk of SOFR-linked trades. The single-curve bootstrapping model is sensitive to synthetic SOFR OIS and not the traded basis swaps, so any deltas you produce to hedge long-dated SOFR risks will only be approximate.

My choice, to instead use the global calibration method in F3, doesn’t lead to this problem either. The global method, together with F3’s built-in Universal Algorithmic Differentiation® (UAD), is a great way to get the complete risk ladder to the real market quotes including SOFR basis swaps. With F3, it was quick and easy to report the interest rate risk shown below, for a multi-asset portfolio and based on a global calibration of the SOFR curve. For me, the advantages of global calibration of the USD interest rate basis are clear. Furthermore, the benefit of F3 is that it is very easy to use this advanced curve building method in order to get the most accurate SOFR curves and SOFR market risk that are possible. 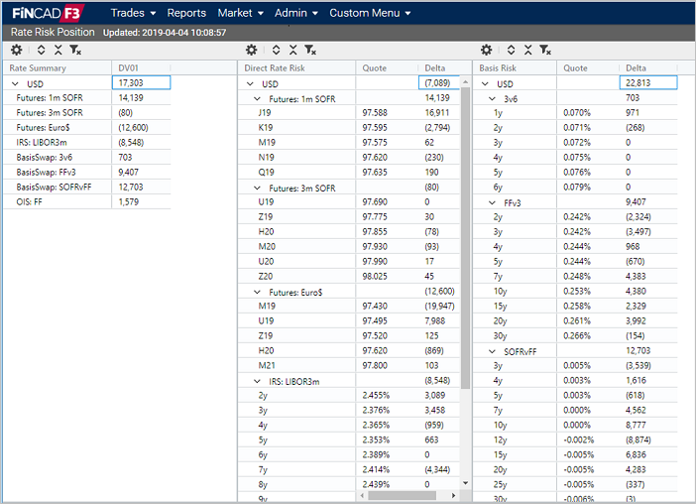 In case you missed them, check out my other two SOFR blog posts in this series:
“Building a SOFR Curve was Easy"
“Connecting the SOFR Curve to SOFR Swaps”